This gluten free pie crust recipe is relatively easy, yet surprisingly flaky. It may take a little practice, but once you get it you'll love it. This pie crust forms the foundation of some of my favorite gluten free desserts, as well as savory pies like quiche.

I love to make pies, and when I had to switch to making them gluten free, it was quite a challenge. But I soon learned that patting in a wheat free pie crust is actually easier than rolling out a crust made with wheat, and can be just as tender and flaky.

Adding a top crust is not as easy, but even though it may look kind of patchy, the flavor and texture are great.

If you try this gluten free pie crust recipe, please let us know what you think.

The amount of water for the gluten free pie crust recipe will vary depending on the humidity in the air and moisture in the flour. You need to add enough so the dough is not too dry, or it will be hard to press into the pie plate. If too wet, your crust may be a little tough or crunchy.  For a more tender crust, I recommending erring on the side of adding too much fat, and less water. 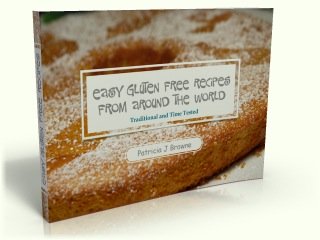 Get a free eBook of easy gluten free recipes by signing up for my FREE monthly ezine.

pie crust because my family and guests like it better. But you can use millet flour

too, which I think gives it a richer flavor.  You can get tapioca flour (also called tapioca starch) from Asian markets, but Bob's Red Mill tapioca flour

may be just as cheap. Arrowroot could probably replace tapioca flour, but I have never tried it in a gluten free pie crust.

To keep the edges from browning too much before the pie is ready, use a pie crust shield available from Amazon. Or cut a circle of foil larger than your pie, cut out most of the center, and fold down the edges. Place it on the pie about half way through the baking time.